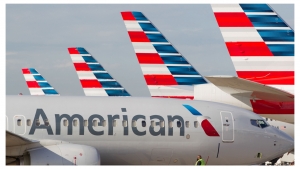 Through financial trouble, talks of job cuts and a merger, American Airlines looks to renew and refresh their brand identity. So, to kick off 2013, the company revealed the first changes in 40 years: a new logo, look, and ad campaign.

The launch was met with mixed review from a business side, questioning finances and whether merging with U.S. Airways should be on the top of the list, but the company says they plan to retain their brand identity, merger or not. Regardless of the variables involved, a re-brand can be a challenge and for such a mature, well known brand their are bound to be critics. The updated logo leaves behind the traditional “AA” replacing it with a vibrant blue and red airplane tail intersected by a crisp eagles head in the middle. It is a big change, but keeping the colors and eagle align the mark with the original identity.

The company will also welcome new airplanes boasting a fresh look. Again, the traditional “AA” on the airplane tail is replaced, this time with American flag stripes, the goal being that no matter where the planes land, their origin is known. As for the ad campaign, the first ad to air features individuals going about their daily lives around the world, who suddenly stop to look to the sky as an American Airlines plane, freshly painted, flies overhead. The ad has a hint of nostalgia, with the ending line of "inspired by our past but driven by the future." Agency of record McCann Worldgroup told AdAge the objective was to bring back the “wonder of travel”. It is true, flying has become such an ordinary occurrence, so the company seeking to bring back the awe and wonder of the experience is different.

For us, the ad works. Check it out below.

If your company is thinking of a re-brand or refresh, contact FiG to see how we can help!