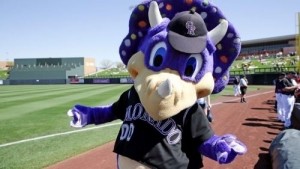 The longest-running debate around Coors Field has nothing to do with whether the Colorado Rockies should have traded for a starting pitcher, or who is the team’s greatest player of all time. Rather, some of the most passionate debates center around the Rockies’ portly and cuddly mascot, the purple triceratops known only as Dinger.

More eyes are on the Rockies as they make a push for their first playoff appearance since 2009. By extension, that means more eyes on their rotund spokes-dino.

A Debate On Sports Branding In Denver: How To Improve A Mascot

“I just think he’s kind of a dweeb,” says Dan Olds of Denver. “The other teams like, Miles for the Broncos is kind of intimidating; Rocky for the Nuggets is fun and goofy and messes around with fans. Dinger kind of just bounces around like Barney.”

Dan’s not the first to connect baseball’s purple dinosaur with the purple dinosaur of kids’ TV fame. Former Denver Post sports columnist Ben Hochman once put it in writing that Dinger looks like “Barney after a meth binge.”

Denver’s poor little guy is the Rodney Dangerfield of baseball mascots. No respect.

The Dinger-bashing has gone national with a Men’s Journal article simply titled “Baseball’s Most Hated Mascots.” Whose smiling face greets you when you open the page? You guessed it — Dinger.

The dugout dino does have his own loyal, vocal backers, like Tyler Pruitt. He was born the year the Rockies unveiled Dinger, April 16, 1994 — “hatched” from a giant egg at old Mile High Stadium, where the Rockies played before Coors Field was built.

“I like Dinger, I grew up with Dinger,” Pruitt says. “When I was a kid, I would come to games and I would get to mess around with Dinger. And the fact that they made him a dinosaur because they found dinosaur bones when they were building Coors field, I think it’s cool.”

Brady O’Neill, the Rockies’ supervisor of promotions and special events notes the “area is known for its dinosaur bones.” He also maintains Dinger’s schedule. The mascot is a big enough deal to have his own personal assistant it seems.

“The first-ever triceratops that was found anywhere in the world was actually found where Auraria campus is,” O’Neill says. “So we are a hotbed of dinosaur activity. We are a dinosaur graveyard, the state of Colorado and the area around us.”

Denverite Daniel Combs gets the prehistoric connection but, “Dinger seems a bit too cartoonish, I guess,” he says.

So what would be his ideal Rockies mascot?

“You know those YouTube videos with the big dinosaurs jumping on trampolines, getting hit by balls, stuff like that? Make that a mascot, rather than Dinger.”

The criticisms aren’t so much that Dinger’s a dinosaur. It’s mainly that he’s not a particularly ferocious one. Both as a triceratops and with his game face.

He doesn’t do a lot of crazy antics, like when Philadelphia’s famous Philly Phanatic messes around with fans, or the Nuggets’ Rocky flings basketballs toward the net from half-court. Dinger will try to distract opposing pitchers from behind home plate late in games, but for the most part, he keeps a relatively low profile at the ballpark, compared to other mascots who are more irascible.

But that’s OK, says Dan Price, principle president of Adrenalin (sports marketing division of Real FiG Advertising + Marketing), a Denver-based company that does branding for sports organizations. Price played a role in bringing Rocky to the Nuggets a couple of decades back, but he says Dinger is a different animal — pardon the pun — with a different personality.

“They just wanted to go down a different path and come up with something unique and they did that very well.”

It’s unfair to compare Dinger to more active basketball mascots like Rocky or the Phoenix Suns’ gorilla, Price says, given the limitations involved in entertaining people at the ballpark.

“If you’re in the basketball arena, there are some given things you can use as part of your stunts,” he points out. “Obviously the hoop – and a big part about what Rocky does are the dunks. I don’t imagine you’d get a mascot at a baseball game to start popping home runs. So it’s the environment.”

Price says Dinger also plays a big role in promoting the Rockies brand in the community, like outreach to schools around the state through the team’s “Make an Impact” program.

“When you have that type of association with a fan base or a potential fan base, where you can send out a mascot, and he entertains and forms that connection for the team, that’s a pretty powerful positioning attribute that these guys can bring in,” Price says.

The Bottom Line Of The Branding Criticism

The Rockies’ O’Neill candidly swats away criticism from Dinger haters. He’s heard it all before.

“If you’re a single male, aged 25-40 you’re here to watch baseball. You're gonna have a beer, you're gonna eat a hot dog, you're gonna watch the game. Dinger isn’t here for you – no matter what.”

On the other hand, he explains, if you’re a single guy who meets a girl and falls in love and you bring a little baseball fan into this world?

“Well now, you’re gonna wait in Dinger’s autograph line, which is ungodly long,” he says. “And the whole time you’re going to be mad because, ‘I thought no one liked him,’ because the line’s really long and all you want is your crying 2-year-old to see Dinger.”

Just consider that the little guy’s revenge. Love him or hate him, the debate over Dinger the dinosaur is in no danger of going extinct, especially if the Rockies roar into the playoffs.