October Ad Of The Month: Burger King Has The "IT" Factor 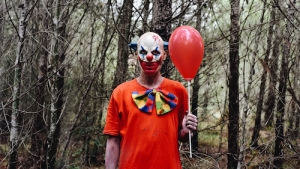 The 1986 Stephen King thriller, It, has been making waves as a second movie adaptation was released last month.

The award-winning novel follows seven misfit children who are terrorized by a creature, commonly presented as a clown named Pennywise, who preys on their fears. Released in the United States on September 8th, the Warner Bros production has raked in more than $300 million in the box office and has ranked #1 since it premiered.

Burger King Has Concerns With Clowns

The movie is not only generating a buzz amongst Stephen King fans and horror movie fanatics but also left its mark on the fast food industry. A global hamburger joint, Burger King, has addressed concerns regarding the similarities between the main character, Pennywise, and their main competitor, Ronald McDonald. Russian leadership of the Miami-based company has gone so far as to file an official government complaint to the Federal Anti-Monopoly Service to have the film pulled from theatres.

With the red hair and red nose, one may be able to see the resemblance between the maniacal, serial-killing Pennywise and the happy-go-lucky Ronald McDonald, but we are not convinced.

The iconic mascot of the famous golden arches brings with it a fair share of complications. With an estimated 12 percent of Americans suffering from coulrophobia, or the abnormal fear of clowns, the brand has to be especially cognizant of the appearance of the mascot. Last year, following world-wide sightings of creepy clowns lurking around homes, McDonald’s cut back on appearances of Ronald McDonald at community events.

The pandemonium surrounding the movie release of the classic novel has only added to the perception headaches McDonald’s faces with their beloved clown mascot. McDonald’s is certainly not benefiting from the clownish villain, so why draw attention to the parallel?

Burger King followed the complaint with a master prank at the German premiere on September 28th. A two-line clip followed the conclusion of the film, prior to the credits with the following text:

“The moral is: never trust a clown.”

The Burger King logo stamps the screen in the silence and then the credits roll.

Videos of the stunts show a terrified audience breaking out into laughter as the brand pulled off a stunt that made headlines. Burger King’s Deutschland YouTube channel captioned their video of the hijacking, stating that they “turn[ed] the horror film of the year into the longest Burger King spot of all times.”

Burger King saw an opportunity and capitalized on a current event that could have led movie goers to their competitor for a late night snack, turning it into a commercial for themselves.

Looking to make waves with your brand? Contact FiG Advertising + Marketing to see what we can do for your business.