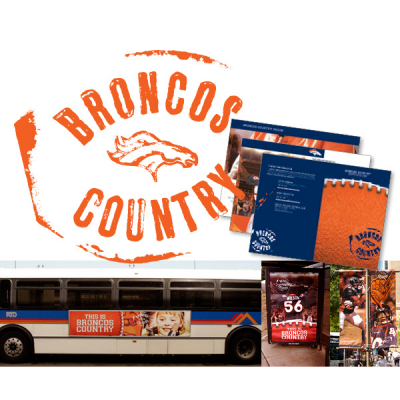 For years the Denver Broncos counted on Adrenalin (a division of Real FiG Advertising + Marketing) to handle multiple projects including corporate sales materials, event and promotion logos, game programs, magazines and newsletters. When the team decided to launch their first ever campaign in early 2000, again they turned to Adrenalin. Under our creative direction and execution, “Broncos Country” was born.

Billboards, bus boards, television and print advertising flooded the city and to this day it continues to strengthen the fan’s brand loyalty.

"We could not have asked for a better partner for the creative development of the Broncos Country campaign. Adrenalin’s ability to create a “fan based” organic campaign that pays tribute to our history and allows future modifications is a true testament of the strategic thinking and planning they bring to the table."