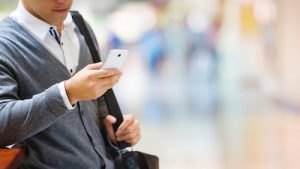 According to a National Retail Federation (NRF) survey, more than 103 million people shopped over the four-day weekend compared to less than 102 million people who visited physical locations. Even more astounding, the number of people who shopped in person decreased this year from last year. The NRF attributes these numbers to mobile. Each year more people are able to obtain a smartphone and marketers are watching the trend and developing mobile friendly websites for consumers.

MediaPost's Sarah Mahoney reported that Adobe estimated that it gained 12% from Cyber Monday to a record $2.98 billion in sales. For the full holiday weekend, Adobe saw its online sales increase by 15% to $11 billion. IBM documented even higher numbers with a 17.3% increase in sales on Cyber Monday.

It may be time to rename Cyber Monday to, "Mobile Cyber Monday." This year the online shopping day saw incredibly strong numbers for mobile over the holiday weekend. For the day, Mahoney reported that mobile shopping encompassed 44.7% of IBM's online traffic, which is almost a gain of 17% from 2014. Even more impressive, after Thanksgiving, the retail giant Walmart saw nearly half its orders placed from a mobile device (RTT News). Fernando Madeira, President and CEO of Walmart emphasized mobile's impact by saying that, "Mobile firmly established itself as the dominant shopping trend, for both traffic and sales. Mobile is making up more than 70% of traffic to Walmart.com." Overall, online sales from mobile devices increased by 32.6% from last year according to Mahoney.

This exorbitant number of online shoppers had a major impact on retailers. Adobe said that out-of-stock rates hit an all time high because of the surge of traffic. Target said that not only did it experience inventory issues, but also web issues. Website traffic for the retailer was twice as heavy as its historically busiest day. As a result, people took to Twitter with the hashtag #CyberMondayFail to complain about the slow checkout times.

The lesson for retailers from this 2015's Thanksgiving holiday weekend is that mobile isn't going anywhere anytime soon. A mobile ready, online shopping experience is a necessity for e-commerce success. To read the full article from Sarah Mahoney, click on this link.

Not sure on how to get your website mobile ready? Contact FiG Advertising + Marketing at 303-260-7840 for more information.

Tweet
Tagged under
Download attachments:
More in this category: « Visa Olympic Paid Search Campaign May Be On To Something Need to Circumvent Ad Blockers? Try These Tactics »
back to top