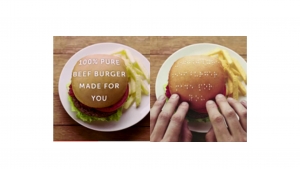 We decided to start off this year's Ad of the Month with an inspirational 3 minute spot from the fast food chain Wimpy. Not many people knew that they catered to the visually impaired by offering braille menus, so Wimpy decided to do something special at the three biggest blind institutions.

Wimpy Chef's made specialized burger buns using sesame seeds as braille so their customers would be able to read what they were about to eat. These descriptions gave these people the ability to “see” their food before they ate it. The look of joy on their faces as they read the message was a clear indication that a little extra attention goes a long way.

The selected few that got to eat these burgers were so impressed with the simple offering that they raved about it in their braille newsletters. A story that started out as only 15 braille burgers, spread to over 800,000 visually impaired people. Wimpy was able to demonstrate that they were aware of everyone's differing needs and took the extra steps to make people feel accepted.

The unbelievable word of mouth that was generated from such a small group of people is what makes this advertisement so amazing. Wimpy does an excellent job of reaching a niche market and letting them know that they are appreciated. They were able to take advantage of needs that were not currently being met within the sight impaired community and are reaping some serious benefits.

Having the ability to generate Word of Mouth marketing amongst your target market is valuable for any business, but knowing how to do it can be difficult to achieve. Wimpy recognized that even though they were supplying braille menus to this segment, not many people knew about it. They decided to let people know by exceeding the expectations of a select few in hopes that they would tell others.

If you order a burger and receive a burger, then your expectations have been met and you likely won't talk about it. But if you can exceed, surprise, and amaze your customers, they will feel compelled to tell everyone they know about their story. This concept is at the core of any Word of Mouth campaign. When flash mobs first appeared on the scene, people were surprised and amazed so they talked about it. If you want people to talk about your brand, contact FiG, and we will make your brand exceed, surprise, and amaze.

More in this category: « Strategy Behind Dish's Blockbuster Buy Out Ad of the Month-Priceline Killing Its Negotiator »
back to top