AI Is Changing The Face Of Marketing: Part 1 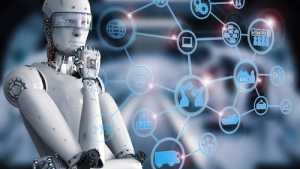 The idea of AI, or artificial intelligence, stems from ancient philosophy, in which philosophers tried to explain the concept of human thinking through the mechanical manipulation of symbols. While initially held back by technological limitations, the increased capabilities of hardware and software have led to rapid development on the AI front. From self-driving cars to voice-operated assistants, we interact with the digital brain on a daily basis without even realizing it.

As the technology becomes more and more intelligent, consumers are not the only ones who will be adapting. The marketing landscape has already changed drastically with the introduction of AI.

It was 1956 when the term 'artificial intelligence' was officially coined. For a summer research project at Dartmouth College, Professor John McCarthy proposed a focus on 'thinking machines' based on the idea that "every aspect of learning or any other feature of intelligence can, in principle, be so precisely described that a machine can be made to simulate it." From this point forward, artificial intelligence research began to expand. AI can be categorized into three different groups.

No, it is not. Having been around since the mid-20th century, the presence of artificial intelligence in our everyday lives is not an exciting, technological breakthrough that we have never seen before. But, it is bringing us into uncharted territory. Google's parent company, Alphabet, has been a major leader in the push towards developing the technology. From the acquisition of DeepMind, the leader in AI research, in 2014 to expediting the training process needed to accomplish deep learning in an AI device with the second generation tensor processing unit (TPU) to surpassing even the most notable automobile developers with Waymo, Alphabet's self-driving car unit, the company is certainly no stranger to technological advancement in this area.

But, It Is Important

Technological advancement in the digital age is important because if you don't catch on quickly, you will very easily get left behind. By the time many consumers are able to grasp the latest and greatest change in the digital world, the digital world has already moved on to the next big thing. When it comes to marketing, at a very high level, the continued evolution of AI is going to change the way we do things. It begins with the menial tasks that take up our time. When we are able to successfully automate those tasks, we free up time to focus on the parts of our job that require human insight, which, let's face it, is most of our job. Additionally, the increased availability and affordability of these advanced data analytics tools allow us, as marketers, to develop truly data-driven communication. This, combined with the time spent delving into the human psyche means more effective, more impactful, more successful marketing.

Stay tuned as we dive deeper into the impact AI has in the marketing industry. Next, we will be looking at how Google's RankBrain algorithm is using AI to sort search results based on intent.

Is staying on top of the latest technologies and newest trends in marketing keeping you from doing what you love? Contact FiG Advertising + Marketing today and let our experts do it for you.

More in this category: « Visa Olympic Paid Search Campaign May Be On To Something Which Is Better: SEO Or PPC? »
back to top