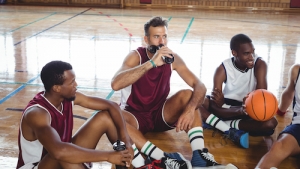 BodyArmor released four 30-second spots on Wednesday that take aim at Gatorade, the sports drink giant. Featuring NBA, WNBA, and MLB stars, each spot depicts an ironically outdated scenario (from 80s workout classes to carrier pigeons) that poke fun at Gatorade's outdated product. Each spot closes with the line, “Thanks Gatorade, we'll take it from here.”

Gatorade has been a longtime partner of the NBA, with a partnership that dates back to the 1980s. Early last year, the NBA announced that Gatorade had purchased the naming rights to the NBA Development League, which is basketball's minor league, and the G-League was born. The NBA Gatorade League is the first title sponsorship of a US professional sports league, so the changing dynamic has been met with a lot of skepticism.

Some feel that the G-League lends itself to slang terms that insinuate gang relationships, while others feel it was a cheap shot at leveraging an established brand to initiate more sales. Ultimately, buying the naming rights was led to animosity towards the brand from fans and players alike. Gregg Popovich and Klay Thompson being a few among the many who are less than willing to support the drink, making post-game comments and displays to snub the brand.

BodyArmor is approaching the industry with the intention of evolving with it. Founder and CEO, Mike Repole, asks "How does it make sense to have the same exact sports drink we had 50 years ago? Athletes are more sophisticated than they have ever been. They train year-round, they have chefs and they read labels."

Gatorade's A-list endorsement roster and significant market share lead don't phase BodyArmor execs, though, who are working hard to create a movement with the help of Kobe Bryant. Bryant is the third largest investor in the 6-year-old startup, behind the founders of the company, and has been intimately involved in the development of the brand strategy and creative.

Repole, told ESPN, “When I teamed up with Kobe, I thought I was getting an elite basketball player with great vision. I wound up with an Oscar winner who has his fingerprints all over our creative...[I] consider him a co-founder.” Bryant's relationship with BodyArmor is different than many other brand endorsements you see from household names. As an investor in the company, Bryant has played a huge role in making it what it is.

In regard to his goals for the brand, Bryant said the following:

“It's one thing to inspire athletes to want to be great and you see a lot of brands doing that. What we are trying to do instead is challenge. And there's a big difference between inspiring and challenging. We live in a day and age where kids are surrounded by instant gratification, but in sports you can't do that.”

Can The Underdog Win It All?

The competition is steep, but who better than a world-class athlete to take on the challenge? According to IRI, BodyArmor has less than a 2 percent share compared to Gatorade's 75 percent market domination. Bryant's not discouraged by those numbers. In the 52 weeks that ended last month, BodyArmor sales grew by 140 percent to nearly $123 million.

BodyArmor is working to make moves in the industry based on product quality and standout athlete endorsements that run the gamete of sports. Created using natural ingredients with no colors from artificial source, BodyArmor is branded as the “better-for-you” super-drink that provides superior hydration. These on-trend building blocks are key factors supporting the success of the product.

Often, we see negative reactions from the public when advertisements directly call out competitors, however, in the right setting it can be a very effective tactic. In the case of BodyArmor versus Gatorade, the public perception seems to be overwhelmingly positive, as Gatorade's recent missteps have sent previously loyal fans back into the market. We're keeping our eye out to see how Gatorade responds to the idea that they are no longer the freshest sports drink in the game.

You can check out the latest BodyArmor spots here.

If you want to create a movement with your brand, contact the experts at FiG Advertising + Marketing.

More in this category: « Search Engine Marketing Proves Lucrative For Travel Industry Windex Transforms The Graffiti Scene »
back to top