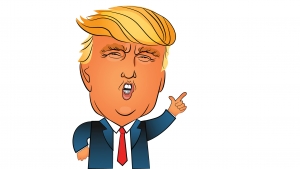 The 2016 Presidential Election has been nothing, if not interesting. Donald Trump, the 2016 Presumptive GOP Candidate, has been one of the most "meme-able" social commodities of the year. The social media beating doesn’t end there. Mike Diva,"Maker of videos/music/memes/dreams," takes viewers through a 90-second senpai-satire of Donald Trump elected as the "World President."

Within three days of dropping the video, Mike Diva received over 13 million views on Facebook; 72K likes and 232K shares. The sheer unconventionality captivates viewers by pulling them through a kawaii rabbit hole with Donald Trump ruling the world.

The spot beings with a pan of a young girl's bedroom that has its walls covered with Trump posters, a life-sized cutout of Donald Trump, and anime drawings of Trump scattered over her desk. A big-eyed, blue-haired girl lounges across her bed schoolgirl crushing over a photo of Donald Trump in her hand. The TV pops on with the announcement, "Trump Elected World President."

The excited girl transforms into a Sailor Moon, Japanese fantasy looking character. She then transports into a cutesy universe of Donald Trump as the World President. She soars into an island of Trump puking a rainbow waterfall. She frolics through a forest of Trump heads dancing on the flowers of the trees. Lifted off into the pink sky of anime clouds, the girl rides a fuzzy dinosaur with a Trump head making his most infamous facial expressions. After a shot of turquoise fighter jets flying over a giant Trump statue lined with pink military tanks, it flashes several images of Trump making ridiculous and obscene gestures. One pose has Trump flashing the "Victory" peace sign. In another, he makes a sweetheart shape with his hands. In another, he is quite possibly saluting Hitler.

The young girl comes running to Trump's arms for a big hug. The two, from the power of their hug, unite into a Transformer-like robot. The "Trump-former" builds up a large, pink wall topped with barbed wire and video cameras. The robot launches into outer space and flips around to face planet Earth and shoots lasers from its hands causing the world to explode into bits and pieces. The video ends with a female voice over, "Trump 2016."

Whether you support Trump or not, the spoof is hilarious. Mike Diva capitalized on a contentious Presidential election as an opportunity to create pop culture art. However, the video seems to be more intent on providing a good laugh than making a political statement. And that’s what makes this our ad of the month. With so much commentary surrounding the presidential election, this video pokes fun at the spin itself.


Need a boost in your social media or content marketing campaign? Contact FiG Advertising to discuss your needs and get a quote.