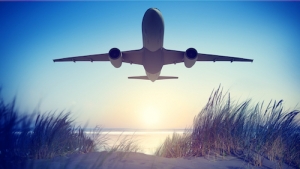 JetBlue, "Got New Yorkers to do the impossible: stop and look up." JetBlue Airlines is making them stop in their tracks with an advertising campaign that uses real-time billboards. The real-time billboard uses Android and Google Maps API to create continuously updated information on a billboard.

The LiveBoard lights up Times Square with current automobile traffic data to the JFK Airport and then the duration of a specified flight. This billboard is one piece in a series of advertisements promoting the convenience of traveling with a JetBlue card in your wallet.

New Yorkers staring up at the lively billboard can see the down-to-the-second time it would take to get to the many destinations where JetBlue flies. JetBlue's billboard doesn’t just feature travel times, they also incorporate their credit card into the story, reminding viewers that the JetBlue card can get them where they want to go, faster.

Of course, the billboard is meant to spark conversation both on and offline. To encourage online sharing and engagement, JetBlue gave people the opportunity to win free roundtrip tickets three times a day by being the first to tweet back #2XASWEEPSTAKES when the company sent out the signal to tweet to win.

While the billboard is only in Times Square, JetBlue also produced a national TV commercial featuring the billboard. The 0:75 spot demonstrates the big idea behind the campaign. "With the new JetBlue credit card you'll fly faster than you think." The ad also portrays people on their smartphones tweeting to win the sweepstakes.

JetBlue offers a set of credit cards to use toward everyday purchases to earn points toward the JetBlue Loyalty Program. Masterminded by Mullen Lowe, the campaign connects peoples' inner travel fantasies with the JetBlue Card. By integrating the billboard, social media and TV ad, takes the bystander engagement beyond the Manhattan City limits.

Of course, not every company has JetBlue’s marketing budget, but a good integrated marketing campaign doesn’t have to cost millions to get results. FiG offers cross-channel marketing strategies for small businesses that produce a robust return on your investment. Call us to discuss your marketing goals.

These three tactics are just a few in our large strategic toolbox. If your brand needs an update, we can make it more cohesive, compelling, and relevant. Call us to discuss your brand and your marketing goals.

Contact FiG Advertising + Marketing today to get a free quote!

More in this category: « Social Media Generation Gap? Ad of the Month: John Cena US Patriotism Take-Down »
back to top