Ad of the Month: John Cena US Patriotism Take-Down 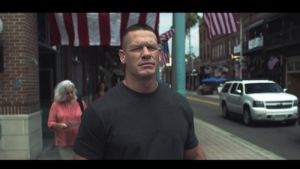 The Ad Council, released a PSA featuring John Cena on Independence Day this year declaring, “John Cena takes a break between dropping body slams to drop some truth.” It’s our ad of the month because it delivers the right message at the right time to the right audience.

Who is Behind the Brilliance

The Ad Council, a non-profit organization that stands for, “Inspiring Change and Improving Lives,” publishes an assortment of communications that address various social issues. The ad agency, R/GA contributed to the Ad Council’s PSA with Cena. The video marked the start of a campaign #WeAreAmerica as an extension of the famous, “Love has No Labels” campaign. The #WeAreAmerica campaign aims to change the bias that we as a society have and what it means to be an American patriot.

In the three-minute spot, Cena walks down the sidewalk of a quiet small town that is meant to represent Small Town, America. Cena defines patriotism as, “love for a country, not just pride in it.” He continues, “What is it we love about this country? The people.”

Cena then challenges viewers to imagine the average American citizen. He helps the viewers’ imagination by proposing questions of how old the average American is, what their hair looks like, and humorously, how much they can bench. Cena sucker punches your imagery with statistics of the American population. 51% women, 54 million Latino, 40 million senior citizens, and 9 million LGBT people.

“Labels don’t devalue us; they define us,” Cena continues. Now with a change of perspective, Cena wants us to picture the average American again. Then he calls us to remember when we sport our star-spangled shorts and set off fireworks the size of his biceps that "To love America is to love all Americans because love has no labels.”

Cena is a fifteen-time World and WWE Heavyweight Champion. He is an actor, and his rap album, You Can’t See Me debuted at #15 on the Billboard 200. He is the Make A Wish, wish-granting record holder, and a wrestling fashion icon. He is a reality television host, bilingual in English and Mandarin and we wonder what can’t this man do?

John Cena started his entertainment career in the WWE wrestling world as one with, “ruthless aggression” but his persona in the ring went from a ruthless rapper to a “baby face” which in wrestling terms means he is heroic and plays the good guy.

After years of success in the WWE ring, Cena has turned to the big screen as well as making appearances in several different TV shows.

Marketing in its best form delivers the right message to the right people at the right time. The timing on this PSA couldn’t be better as recent news, events, and politics have put matters of race in the forefront of the nation’s conversation. The choice of Cena to deliver a script about what the average American really looks like is spot on as Cena is well liked across social, geographic, and economic stratum. Most importantly, he is someone kids look up to.

This PSA is timely, hits the right note of both patriotism and emotion and is delivered by a credible spokesperson. It’s the trifecta of content creation.

Is your content defining your brand’s voice and getting your brand the attention that it deserves? Contact FiG today to discuss a lead-generating content marketing strategy to take your business to the next level.

More in this category: « Social Media Generation Gap? Marketing Thought: Snapchat - The Features »
back to top