Ad of the Month - McDonald's - Staying Up 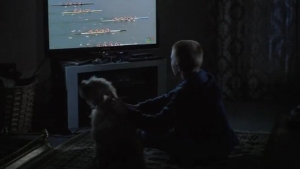 This month FiG's attention is on the upcoming Olympic games, and our ad of the month comes from one of its long-term sponsors: McDonald's.

You must think that the hard-working London people are tired from all the Olympic preparation, but let McDonald's tell you otherwise: People are excited and will make time to stay up late watching the live game!

In this video, McDonald featured a young boy who desperately tried to stay up and watch the live Olympic games. The boy's dad that didn't want his son to stay up that late for the Olympics and took drastic measures to stop him, yet the boy kept fighting back! He covers the window to hide the TV lights, moves a TV set downstairs, feeds the barking dog, wears headphones, and builds a den... Eventually, his dad stops fighting him and joins him watching the games in the den with a bag of McDonald's. Then the slogan appears: Proud supporters of everyone staying up.

We love this ad because the story is so touching and that it can happen in the world. It is usually hard to feature a common life story for the fact that it is not surprising and everyone knows about it.  To make it a great 90 second story, the constant emotional roller coaster is the key.

Additionally, it is a great ad because the focus of the video is on the boy and his Dad. If you recall our blog "Web Video Science" a couple of months ago, one of the rules for creating a great video is that the video must be good without a brand's logo or mention.

Though there is a debate at McDonald's as to whether or not this video will be used for an official sponsor spot for the Olympics, the video has started attracting interest online.

Visit FiG or contact us if you want to know more about creating successful web video ads!