Why The Biden Dog Ad Is Effective, As Told By A Denver Marketing Firm 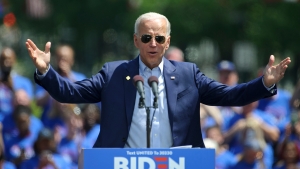 As the presidential race enters the final few weeks, we’ve all seen plenty of political ads. However, a new political ad in support of presidential-hopeful Joe Biden has caught everyone’s attention because it’s unlike any we’ve ever seen before. The ad centers on the fact that Donald Trump is the first U.S. president in more than 100 years who doesn’t have a dog. With the tagline, “choose your humans wisely,” the ad appeals to people across party lines through a beloved human interest: dogs. And it’s incredibly effective. Here’s why, according to a top Denver marketing firm.

Comparing the past with the present

The ad begins by featuring past presidents with the dogs they had while in office. First, we see Ronald Reagan and Lucky, a Bouvier des Flandres; George H.W. Bush with Millie, an English Springer Spaniel; Bill Clinton with Buddy, a chocolate labrador; George W. Bush with Barney, a Scottish Terrier, and Barack Obama with Bo, a Portuguese Water Dog (via AdAge).

These images of past presidents smiling alongside their dogs is followed with Trump yelling at a campaign rally, “How would I look walking a dog on the White House lawn?” and shaking his head at the mere thought. The ad ends with Biden and his dog Champ, with a powerful tagline of “Choose your humans wisely.”

This stark difference between past presidents and our current president draws into question the character of the president. It will surely make some voters ask, “Why doesn’t Trump own a dog?”

The “Choose Your Humans Wisely” ad was created by a group called Dog Lovers for Joe. The idea for the ad came to creator, Rob Schwartz, after he kept seeing “all these wonderful photographs of Joe Biden and dogs on the internet.” This realization led him to do a little bit of research to see if there was any science that supported the correlation between strong leaders and dog owners. He found many articles and studies supporting the belief that “dogs bring out the best in people.”

He started digging some more. And that led to his discovery that dogs were a unifying factor across party lines, as dog ownership is high in both red, blue, and swing states. Not only does this ad point out Trump’s unusual stance on dogs, but it also aims to appeal to people of every party and unify voters instead of dividing them. And we think that’s something we can all agree this country needs a little more of right now.

In today’s digital age—where consumers spend hours online every day—it’s becoming more and more difficult for companies to reach their audience without the help of professionals. If you’re in need of advertising services, reach out to us at FiG Advertising + Marketing. We are a top Denver marketing firm with more than 10 years of experience assisting Colorado-based businesses with both traditional and digital advertising.

What are you waiting for? Contact us today to learn more about how we can help create impactful advertising for your business.

More in this category: « What Apple’s Privacy Ad Gets Right According to a Top Denver Ad Agency Thoughts on Twitter’s BBC Dad Ad From a Social Media Agency in Denver »
back to top