Transparency In Advertising From Big Tobacco 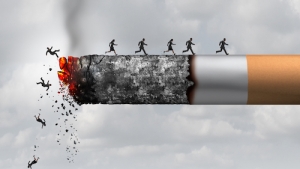 Nearly twenty years ago, a battle was waged against the tobacco industry regarding the inaccuracy and blatant deception in cigarette ads over the past half a century. Last month, the repercussions took full effect with a series of transparent “corrective statements” paid for by big tobacco themselves that warned of the effects of smoking.

The idea of appropriate transparency in advertising been an ongoing debate for years for big tobacco. Let's examine the history of this debate and why it's important.

If you rewind about fifty years, you would find cigarette ads that oozed the kind of suave seduction more commonly associated with perfume (or a Carl's Jr. burger). The copy of these original ads boasted that smoking a Camel would make men more manly and lighting up a Kool made women that much cooler. These ads ran largely uncontested until the early 80s, when organizations like the American Lung Association and the American Cancer Society took action, running anti-smoking ads that were as common as their pro-smoking counterparts.

There is an abundance of seemingly inflated advertising out there in every industry with an equal number of hoops advertisers have to jump through in order to prove the so-called “facts” they are advertising. This is where the big tobacco marketing strategy fell flat.

In 1999, the United States brought a lawsuit against nine cigarette manufacturers and two related trade organization citing previous and continued violation of the Racketeer Influenced and Corrupt Organizations Act with a conspiracy to deceive the public about the health effects of smoking. Specifically, the plaintiffs were looking at the misleading information big tobacco was sharing about the addictiveness of nicotine and the use of phrases like “low tar” and light” to manipulate the perception of these types of cigarettes.

In addition to the inaccurate positive claims, it was argued that big tobacco also falsely denied that:

The final ruling in the case required explicit transparency from cigarette advertisers and prevented any further use of deceptive descriptors and the issuance of corrective statements across a number of outlets. In these corrective statements, big tobaccos must clearly explain the health effects of smoking, the addictiveness of nicotine, the lack of any benefit from low tar or light cigarettes, the effects of second-hand smoke, and, finally, big tobacco's manipulation of the product to sustain addiction.

A number of appeals and negotiations followed, with the final wording for these corrective statements only being decided upon earlier this year.

In late November, the campaign launched with a variety of ads running in print, digital, and on television. The ads explain that a federal court ordered Altria, R.J. Reynolds Tobacco, Lorillard, and Philip Morris USA to make a statement, followed by the negative effects of smoking and an admission that cigarettes are modified to offer enough nicotine to create and sustain addiction.

You can see the entire campaign here.

But, Does Transparency Work?

While these corrective statements are decades in the making, many are skeptical of the effectiveness of the campaign. Kenneth Warner, a professor of public health at the University of Michigan, says that the confession from big tobacco that they intentionally manipulate cigarettes to make them more addictive will likely be the most impactful part of the campaign. Most of the facts about the harmful nature of cigarettes included in these campaigns are old news, but smokers may become irritated to find out that there was a method to the addiction.

The design of these ads may overwhelm the message, as they feature a plain white background and disembodied voice-over that is almost asking to be ignored. The lack of imagery in these ads has many wondering if this effort to show transparency in cigarette advertising is too little, too late.

However subtle, the anti-smoking campaign marks a new turn in successfully advertising to consumers. Stanton Glantz, a Truth Initiative professor of tobacco control at the University of California, San Francisco says “[the ads are] meant to, to some extent, reverse 50 years of lying to the public.” With this shift towards transparency, advertisers will find that consumers will no longer put up with inflated ads and they will do their own research to disprove claims.

If you're looking to build a relationship with your consumers through honest, meaningful communication, contact FiG Advertising + Marketing for a consultation.

Request A Meeting
Tweet
Tagged under
Download attachments:
More in this category: « November Ad Of The Month: Svedka Cursed The Internet Taco Bell Offers The Keys To A Secret Society »
back to top