Taco Bell Offers The Keys To A Secret Society 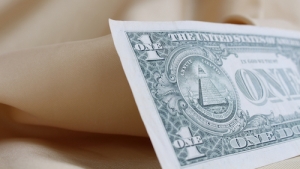 Inspired by a local taqueria, San Bernadino restaurateur, Glen Bell, opened the Mexican-inspired favorite, Taco Bell, in 1962. In just five short years, the fast-food restaurant had more than 100 storefronts in states all over America. By 1997, Taco Bell had more than exploded on the fast-casual dining scene and was purchased by YUM! Brands, formerly Tricon Global.

Not unlike their food industry prowess, the chain has never shied away from making a splash in the marketing scene either. From a galactic campaign that offered a free taco to everyone in the United States in 2001 to a petition requesting the Federal Reserve to produce more $2 bills for the $2 Meal Deal in 2010, Taco Bell is no stranger to sensational marketing tactics. Most recently, they have launched two 30-second spots promoting their Dollar Cravings value menu.

The spot opens with a digital rendering of the Illuminati triangle and Taco Bell logo merged together. Featuring glowing elements that offer a sci-fi effect, viewers are swept into a lavish ballroom with an extensive buffet of value menu favorites. All the while, the narrator explains the subtle hints at Taco Bell that can be found on a dollar bill. Suspense runs high as masked party guests and ominous hooded figures enjoy the Taco Bell Cravings, begging the question:

"Who's really behind this? Is it the Illuminati or the...Belluminati?"

Some were intrigued by the secret society, others, like Charlie Daniels, were uncertain of where their dollar might take them. See what kind of extravagance your dollar can get you here.

The latest effort to promote the value menu at Taco Bell comes on the heels of extensive consumer research that revealed people consider the value menu as a "trade-off." This perception is related to the overly simplistic options and small portions that diners often receive from the discount section of the menu. Taco Bell, however, boasts an extensive selection with tacos, burritos, and their new Stacker among the 20 meal choices that guests can enjoy for just $1 each.

Chief Marketing Officer, Marisa Thalberg, says that "this powerful connection between the dollar and Taco Bell" is a "real point of difference." The intention of the newest campaign was to convey how Taco Bell's value menu stands apart from other fast-casual restaurants'. The campaign appears to have done that and much more.

The two 30-second television spots are supported by social elements that have created a secret society that one only needs a dollar to gain entry into. Taco Bell's spin on the Illuminati, an Enlightenment-era organization, is a complete 180 from marketing efforts done by others in the fast-food industry. Rather than a focus on the typical perceptions of value menus, the Dollar Cravings menu is now at the center of a "society" that is cloaked in decadence and prestige. The comical campaign perfectly ties together sarcasm and strategy to position the value menu as an appetizing and affordable option for Taco Bell diners.

Following the successful launch of the Belluminati spots was the announcement that fans will not be seeing Taco Bell in the upcoming Super Bowl. Thalberg explained to AdWeek that "it's not something [they] will ever be compelled to do," preferring to keep Super Bowl advertising among many other tools in their marketing arsenal to use occasionally, instead of annually. Taco Bell will, however, be directing their budget towards more television advertising in general and away from digital. While some campaigns, including the Belluminati, will be supported with digital elements, Thalberg says digital advertising has previously led them "down some garden paths."

If you are looking to stand apart from your competitors, contact FiG Advertising + Marketing today to schedule a consultation.

More in this category: « Transparency In Advertising From Big Tobacco The Best Superbowl Commercials of 2018 »
back to top