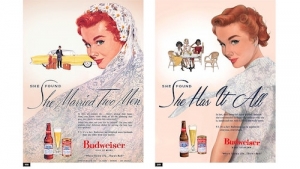 If you ever look back through old advertisements from past decades, you may find yourself cringing, often. Advertisements from the Mad Men era may feel ancient to us, but from the progressive framework of our modern era we can repeatedly find sexist or racist elements integrated into them.

Many brands, like Budweiser, have evolved with the times by adopting more inclusive marketing frameworks and innovative advertising practices.

To mark the 2019 International Women’s Day (an annual event on March 8), Budweiser faced the sexism of past advertising campaigns and owned up to them by reimagining and publishing three separate ads from the 1950s and 1960s. The updated ads were published alongside their original counterparts to demonstrate the positive changes. The artistic style of the ads remained consistent with that of the era and the outdated, sexist copy and imagery were replaced with progressive statements and supportive images.

For instance, this original advertisement from Budweiser (below) showcases the archetypal marriage of 1962 with the breadwinning man coming home to enjoy a Budweiser with the meal his homemaker wife created. Obviously, this ad was originally targeted for men, telling the man to “loosen your tie and enjoy your Budweiser”. The updated advertisement instead focuses on the woman, replaces the man with a dog, and emphasizes that it’s now personal time to relax with a Budweiser; this time around it’s chinese takeout instead of a home cooked meal.

The advertisements ran in The New York Times, Chicago Tribune, and LA Times on Friday, March 8. While the ads may have been Budweiser’s idea, the intent was sparked by their partnership with the #SeeHer initiative, which was started by the Association of National Advertisers to improve the portrayal of women in advertising.

What This Means For Budweiser

The change in the phrasing, imagery, and purpose demonstrates a larger shift in Budweiser’s marketing strategy from their Mad Men era. Rather than marketing exclusively towards men, the entire brand has shifted towards marketing to everyone. Of course, Budweiser did not start marketing this way just the other week.

The company is, instead, recognizing International Women’s Day, which has become an increasingly important moment for marketers in recent years. It’s a unique opportunity to demonstrate how they value their customers and align their company with the changing climate. However, advertisements like these put the pressure on Budweiser to adhere to new standards of representation and to be more conscious of how their engage with their customers.

What This Means For The Advertising Industry

It’s worth noting that Budweiser was not the only company to capitalize upon this international holiday. Companies like PepsiCo, PayPal, Barbie, and even Vans created advertisements to celebrate Women’s Day and to also partner with similar initiatives to #SeeHer. All of which have the similar goal of improving company image in the eyes of women across the globe and demonstrating their progressive nature.

With so many companies contributing their own two cents to International Women’s Day, it feels as though this holiday will continue to grow in importance and that companies will continue to create marketing campaigns around this holiday. This means that advertising campaigns in March will only get more competitive and, while those campaigns may have good intentions, the ideals behind the holiday could become clouded by capitalistic corporate culture.

Still, as long as future advertisements celebrate women and encourage cultural positivity, advertising companies can play a big part in cultivating a progressive and equal future for all consumers.

FiG Advertising + Marketing is always listening to the marketing industry, taking notes, and generating new ideas. Reach out to hear more about our other thoughts surrounding the advertising industry.

More in this category: « IHOP Tries Out A New Name: Marketing Genius or Total Flop? Game of Thrones Creative Advertisements Fight For Their Own Throne »
back to top