Game of Thrones Creative Advertisements Fight For Their Own Throne 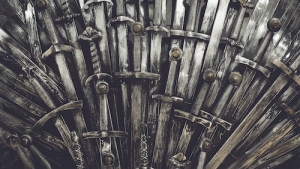 The end of an era is finally here. Whether you’ve been a passionate fan since the first book was published or you’ve never seen an episode, you are probably aware that the groundbreaking HBO series “Game of Thrones” is officially coming to an end. And although people continue to speculate who will end up on the throne by the end of series finale, different creative advertising campaigns for GoT have been fighting their own battles for their time in the spotlight.

Of course these creative advertisements are all leveraging the final season of GoT to bring their brand front and center - however, each advertising campaign is coming from a different company and each of them competes to place their product ahead of the competition.

The Dew Enlists Migos to the Fight

Jumping on the GoT promotional train, Mountain Dew recruited the members of Migos, along with two professional athletes, to sing along to the theme song for GoT. Roughly 40 seconds in, however, Migos begins to remix the song with their own GoT-inspired rap verses, adorned in GoT style clothing.

It is worth noting the performers are stressing the word “dew” as they sing the theme song, giving some relevancy to Mountain Dew. But, the creative advertising was clearly more geared building hype for the final season and getting people interested in watching the season premiere.

The Fall, and Rise, of The Bud Knight

It can be assumed that everyone shared the same surprise when the original Bud Light-Game of Thrones crossover commercial during the Super Bowl this year. The “joust” starts off as a typical “Dilly-Dilly” Bud Light ad, until the Bud Knight is knocked off his horse and killed off in brutal fashion by the Mountain. Then chaos ensues with a fire-breathing dragon flying overhead and the audience going absolutely berserk. Who said a hectic and confusing commercial couldn’t be creative advertising?

Of course, this commercial aligned incredibly well with the twist endings that Game of Thrones is well known for and was directed by the David Nutter, the man who shot the infamous “Red Wedding” episode. With so many references to the show integrated into the commercial (e.g. Oberyn Martell’s death, the jousting scene from season 1, etc.) it’s no wonder the commercial was an instant hit online and generated a lot of discussion between fans.

Without a doubt, this ad hits its mark. However, it’s unclear if this ad increased Bud Light product sales or not, as there were other Bud Light ads that aired during the Super Bowl. If the only goal of this ad was to generate hype for GoT, then they have succeeded.

But, Bud Light was clearly not ready to say goodbye to their clever marketing campaign and revived the Bud Knight just at the start of April, in a Jon Snow resurrection parody. Surely, he’ll still be around to bring levity and wit back to the medieval Bud Light kingdom.

Oreos Map Out Their Kingdom

With a small spark of creativity, Oreos developed their own advertisement to generate hype for the new season of GoT by recreating the title sequence with oreos. Yes, oreos. The entire sequence has the same blocky art style and seemingly sentient buildings, with the entire map of Westeros coated in the snow-like oreo cream. The entire animated landscape apparently took 2,750 cookies to create. Talk about creative advertising!

But, that’s not all. Game of Thrones style oreos hit the shelves of grocery stores at the start of April, allowing fans to create their own versions of Westeros architecture or eat certain GoT houses and spare others. It’s an intriguing collaboration between two big brands and people are interested in purchasing these limited edition cookies before the season ends. There’s no doubt that this collaboration will boost oreo sales.

Do These Creative Advertisements Work?

From an outsider’s perspective, it can always be difficult to judge how collaborative ads like these work for the brands. Certainly, in our digital age, they generate huge buzz around those brands (you can find hundreds of blogs and thousands of tweets concerning the Bud Knight death), but in terms of who benefits the most from the ad (the company or the show), it’s a difficult to tell.

Let’s take the Migos Mountain Dew-GoT ad, for instance. It’s only a minute long, but that minute cost Mountain Dew and HBO a considerable amount of change. They needed to book the professional athletes and Migos for this ad, which can’t be cheap. While these companies most likely have money to spare, the question has to be asked: who will benefit more from this ad? HBO or Mountain Dew?

While the Oreo marketing campaign may be encouraging consumers to buy oreos, the Migos ad works to advocate that viewers watch the final season of GoT. That being said, an argument could be made to support the idea that the ad also benefits Mountain Dew, by associating their brand with such a popular show and showcasing their company in a positive light, thus influencing consumer perceptions of their products.

The last time we counted, there were more than 100 brand collaborations with GoT for the final season. And these brands may or may not receive a significant boost in sales due to these advertisements, however they certainly benefit the brands greatly through association and exposure. Someone who might’ve disliked Bud Light prior to the Super Bowl ad may now view their products as agreeable and may enjoy their advertising a bit more, making them more susceptible to future marketing campaigns.

Regardless of how involved you are with the show, you can’t deny the cultural impact that Game of Thrones has had. The marketing campaigns for GoT are firing on all cylinders with new, creative advertisements airing every week and, since the trailer received such substantial traction, it’s fair to say the final season will break viewership records.

We all know one thing is for sure: We’re hyped.

FiG Advertising + Marketing is always listening to the marketing industry, taking notes, and generating new ideas. Read up on our other thoughts surrounding the climate of the advertising industry today.

More in this category: « Ad Of The Month: Outdated Ads Reimagined For International Women’s Day Thoughts on WNBA Rebrand from Denver Brand Development Agency »
back to top