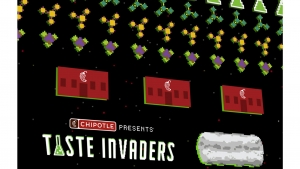 We all know Chipotle has the best burrito. They also give good marketing. They have often centered their advertising campaigns around their commitment to serving locally grown, non GMO food.

Back to the Start

Chipotle did an amazing job of this in their YouTube ad, “Back to the Start,” which featured an emotional farmer who sees error in his industrial animal factory and slowly begins to turn it around to sustainable farming. It has about 9 million views and counting. CAA's Todd Hunter was a part of the “Back to the Start” team and explained that the ad was an, “. . . attempt to create a culture around an idea.”

Chipotle's latest ad, “Taste Invaders” has taken a new direction. They have diverged from pulling at your heart strings to inviting you to enjoy a fun, interactive game while still staying on message of Chipotle's mission to combat artificial ingredients.

“Taste Invaders” is a retro, Atari-style online game. It is based on the iconic game, “Space Invaders.” Chipotle's ad follows the same basic rules, where a player's burrito must dodge falling missiles and simultaneously shoot down bad guys, also known as artificial ingredients and junk food. If a player fails to defend its burrito, the game pops up with anti GMO messages like, “You just got silicon diox-died.”

Chipotle will be promoting the game through social media and their website.

The “Taste Invaders” ad takes cause marketing to a whole new level. It not only allows Chipotle to push its message, “Food with Integrity” to customers, but also directly interacts with consumers. Adding a competitive element takes engagement to the next level as well. With this ad, customers are spending more time with the brand playing and competing. As a bonus, it is fun. There are people who boast high scores well past the 100,000 mark.

Cause marketing is important because according to a 2013 Cone Communications Social Impact study, 89% of US consumers are likely to switch to a comparable brand if that brand is associated with a cause they care about. Finding clean food from reputable sources is a cause that many people are passionate about.

The lesson to take from Chipotle is the one for the tortoise and the hare. It is a marathon, not a sprint. In order for cause marketing to work, it must be deeply embedded in your company's vision and and culture. It takes time to curate, but once it has matured, it can do wonderful things. Since going public in 2006, Chipotle has seen on average an annual growth of at least 20%.