Ad of the Month: Ron Burgundy For Dodge Durango 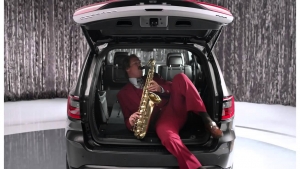 Not only has Dodge snagged Will Ferrell for the new Dodge Durango ads, but they snagged him as his character, anchorman Ron Burgundy. The team at Dodge’s ad agency, Wieden + Kennedy, crafted an ad campaign featuring the 1970's Burgundy pitching a car from 2014.

The ads are both humorous and cross promotional, reminding people of the famous, funny anchorman character as a sequel is set to come out in the next few months.

The ads are also a great example of creative concepting or a deconstructed ad. Taking a product, the Dodge Durango, and making it a car ad without being a traditional car ad.  The car never moves, but gets a ton of face time with the audience as it sits front and center on a sleek and clean stage.  It is more about getting exposure rather than direct sales and with the hilarity of Ron Burgundy’s pitches, which include highlighting the horsepower and glove box, the audience is sure to remember the ad.  They can then go to other media channels to learn more about the car.

A number of spots were produced with various endings and punchlines.  Enjoy a few of our favorites below…

More in this category: « Strategy Behind Dish's Blockbuster Buy Out An Alcohol Ad Above The Rest »
back to top