Ad of the Month - Toyota The Hybrid Maker: Advanced Technology 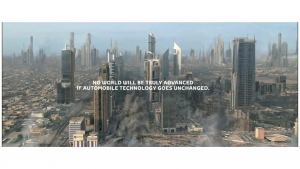 Toyota and Saatchi & Saatchi inject a bit of magic into the hybrid automobile industry with a film-feeling ad created in Italy.

As we imagine someday in the future that high intelligent devices will make our daily life easier, it is inspiring to see the predicted lifestyle in this video: seeing your outfit on you without wearing it, reading news with iPad xx, the hint of alien influence we have from hearing the Space Odyssey theme playing softly in the background, and wait a second, they are still driving a hand-powered smokey car that I thought became extinct earlier in the fifties...

Yes, you know what FiG is talking about after watching it yourself.

We chose this video as our ad of the month, because of the smart contrast, the mysterious story line, and the absonant automobiles in the advertisement.

Instead of showing you a cool and fabulous concept car, Toyota is showing you a clumsy antique and is waiting for you to say "What? Why are they driving these ......?"  This way the automobile maker leaves you to imagine what kind of car would fit in such an era, and how important it is to develop the automobile's technology.

The designers and marketers behind the scene definitely know how to play its mysterious card. They first took a little peek at the future of the world as an ordinary couple living in a metropolitan area. If the story flows to an end with a "flying boat" or "transmission devices", it becomes another "science fiction" dream of the day kind of ad, and it is very unlikely that we will remember the cars.

How do we make people remember a future car and understand the importance of technology development? First of all, none of us knows what a future car looks like, not in an era like this. Second, it is easy to step too deep in the high-tech theme and turn an interesting automobile ad into a boring engineering video. Third, is it smart to show the audience and the competitors a peek of your high-tech product and risk being criticized or copied? FiG doesn't think so. FiG thinks Saatchi & Saatchi is smart enough to think through all of this, and what they have filmed solves all our questions! More importantly, by showing nothing, they showed a lot more than we expected.  This is the power of a truly creative advertisement.

FiG understands the subtleties that are needed to create a memorable advertisement. Our creative offerings might be just what you need!