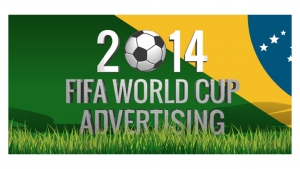 The 2014 FIFA World Cup Brazil is just around the corner (beginning June 12th) and both official and “ambush sponsors” are hot to push new ad campaigns!

The official sponsors this year include Adidas, Budweiser and Coca-Cola. Adidas was in charge of making the official match ball, which they named Brazuca, and created several short films to push it. Budweiser began their “Rise as One” campaign, including a series of short documentaries looking at how soccer connects and unites people from various countries and cultures. Coca-Cola’s campaign themed, “The World’s Cup,” has a main short ad film as well called “One World, One Game," inviting young players from around the world to come to Brazil for the games.

The official sponsors are not the full story though, as the unofficial, or “ambush sponsors,” are pushing just as hard.  Nike just released a new Nike Soccer video called “Winner Stays” part of their “Risk Everything” campaign.  While the video is not officially for the World Cup, pushing a new soccer shoe instead, it is full of star players who will be seen on the field.  Other ambushers include MillerCoors who plans to advertise on Univision, and PepsiCo who also created a new campaign, “Now is What You Make It.”

Large TV broadcast events like this, create a huge opportunity for brands.  Advertising for this event traditionally is tricky for the World Cup - the only time for commercials is during half time, therefore causing limited timing and inflated prices.

That is where social media comes into play. With the Wall Street Journal dubbing Brazil “social media capital of the universe,” we are sure social conversations will be louder than ever. Unruly Media measured the average share rate of branded videos is at 1.31 percent, but in Brazil it jumps to 4.41 percent. Adweek reported that “108 million people watched the Super Bowl, while 3.2 billion watched the last World Cup, with 715 million watching for the finals alone.” With an audience that large, no one wants to be left out or left unheard.

Getting your campaign to go viral is one of the most effective ways for your message to be heard, the trick is just getting that to happen! With greater opportunity for engagement and a cheaper option than a sponsor broadcast, money can be put towards an awesome campaign with the ability to touch multiple platforms. We will have to stay tuned to see which brands come out on top of this years World Cup, but it's sure to be an great advertising tournament!

More in this category: « Anchorman 2: The Power of Large Scale Social Marketing Visual Content is King - Part 2 »
back to top