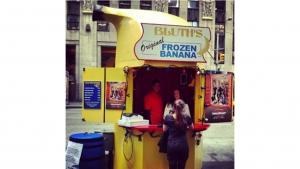 p>There were many disappointed fans when Fox canceled the sitcom Arrested Development after just 3 seasons. Thankfully, the series was picked up by Netflix who recently announced that after 6 years, they will be  releasing a fourth season this month and there are rumors of a movie in the works as well.

Netflix plans to release fifteen new episodes all at one time on May 26th for your memorial weekend viewing pleasure. While original content is something new for Netflix, there is not much risk of failing to capture viewers, in large part due to the show's cult fan base.

Anyone who has watched the show is familiar with the infamous family business - Bluth’s Original Frozen Banana Stand - and in preparation for the big release, Netflix took advantage of that, bringing the Banana Stand to life on a worldwide tour. The stand has been popping up in various cities over the past month including London, New York and Los Angeles, bringing long lines of loyal fans waiting to get a frozen banana and with hopes of sighting a cast member.

All this hype can only be a good thing for Netflix and its brand. After a division of services and price increase a few years ago, the company was almost written off for failure. However, it seems to be back on track and doing well, embracing new opportunities as people look for alternative ways of viewing. They have taken advantage of an enormous marketing opportunity with Arrested Development and have succeeded by knowing their audience and utilizing one of the most well known aspects of the series.

When you are ready to boost your business brand, contact the best Denver brand agency, FiG Advertising!