Ad of the Month: Tesla Unknowingly Gets an Ad 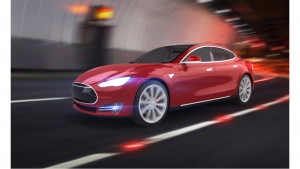 Tesla Motors Inc. does not pay for advertising nor do they have an agency, but they now have a 1 minute ad thanks to two young creatives who are fans of the brand.

After graduating and before starting their company Everdream Pictures, Co-CEOs James Khabushani and RJ Collins decided to create a space themed ad for the electric car brand.  The ad “Modern Spaceship” depicts a kid jumping into a Tesla Model S and imagining he is flying through space. The ad was filmed in the garage of a college roommate’s father who happened to own a Tesla and the whole thing only cost $1500 for hotel, food, gas and other travel costs.

Through exchange of a few emails, the video got the attention of Tesla Motors CEO, Elon Musk. Musk had nothing but good things to say and the company posted the video on Facebook, Twitter, and Instagram, for which a shortened version was created. Musk also personally shared it through his Twitter and made hints at future work with the creative company. The Everdream duo proved that you don’t always need a $250,000 budget to produce a great ad. As they told Adweek, the ability to create fast and cheaper content is out there. Check it out and let us know what you think!