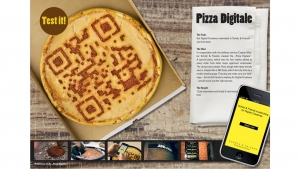 We all know advertising agencies are supposed to be creative, but that usually extends to the clients and not prospective employees. The creative geniuses at Scholz & Friends decided to think outside the box, or in this case inside a pizza box, in order to steal Digital Creative talent from their competitors.

The idea, branded Pizza Digitale, was to team up with the local pizza shop Croque Master and added a “specialty” pizza whenever another agency's employee ordered from them. For over a four week period they added this extra pizza which was really just dough with sauce made into the shape of a unique QR code. While QR codes can be hit or miss with some consumers, it's easy to see why it would be very difficult to resist one made specifically for you.

This inventive little experiment apparently made a few impressions since they landed 12 job interviews with their competitor's employees. Scholz & Friends were finally able to add 2 new teams for their Digital Unit and also gained some always needed exposure along the way. This is definitely one of the best creative recruitment efforts we have ever seen, and it only makes sense that it originated from an Advertising Agency.

Scholz & Friends has given all new meaning to being a creative agency. They have shown that by going outside of the traditional landscape they can not only increase their talent pool, but also stand out in a highly competitive environment. The stunt has most certainly shown prospective clients that their creativity extends beyond what is expected and moves into the realm of being unpredictable. This is exactly the type of thinking that will get you noticed in an ever crowded marketplace.