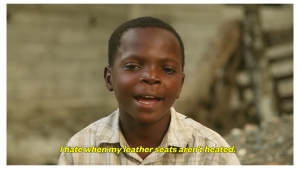 Last October, DDB New York teamed up with clean water organization WATERisLIFE to produce their #FirstWorldProblems campaign, using the popular hashtag to create awareness around the water shortage in Haiti.

This year, the two companies teamed up again for a follow up campaign, “Kenya Bucket List” which is focused on the lack of clean water in Kenya. Here, water conditions are so poor that children have a 1 in 5 chance of dying before reaching age 5. Driving home this statistic, the campaign focuses on the aspirations children have for themselves.

Putting a name and face to the campaign this time, the WATERisLIFE team takes a 4 year old boy Maasai boy named Nkaitole on a journey to complete his bucket list and having never left his village, there was a lot to explore! Beating the fastest man in the world, flying in an airplane, receiving his first kiss, and seeing the ocean for the first time are just a few of the amazing things this little boy gets to experience. Both adorable and heartbreaking, the video does the trick.  No child should have a bucket list but instead have hopes for the future. The campaign is being promoted with the hashtag #5yearstolive - check it out below!

More in this category: « Strategy Behind Dish's Blockbuster Buy Out Chipotle: Cultivating a Better World »
back to top