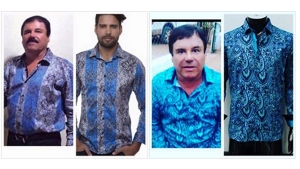 The Mexican drug lord Joaquin Guzman, more famously known as "El Chapo" was arrested on January 8, 2016. His arrest story was all over traditional and digital media. Los Angeles retailer Barabas discovered that El Chapo was pictured wearing one of their shirts in a Rolling Stone article by Sean Penn. They have since been on a non-stop social media marketing campaign to cash in on their famous model.

The clothing brand kept the social marketing buzz going by offering customers a chance to win one of the shirts by liking them on Facebook or Instagram. They gained “likes,” awareness and more customers. The shirts started selling like hot cakes. The El Chapo shirt was so popular that the overwhelming traffic crashed the Barabas Men website. Though, this did not impede the retailer from capitalizing on the event.

During the State of the Union, First Lady Michelle Obama wore a marigold dress by Narciso Rodriguez. Vogue explained that the fashion choice, "allowed the FLOTUS to beam brightly like a beacon of, well, hope." The American public certainly agreed. In fact, the dress sold out on Neiman Marcus' website before her husband's speech was over.

How did the dress sell out so quickly? Because of Twitter. Time reported that the origin of the dress was unknown until a reporter from the Independent Journal broke the news with this tweet: Also, Neiman Marcus was quick to respond to its fans by immediately putting the dress on sale and dropping the price from $2,095 to $628. The combination of people talking on Twitter and Neiman Marcus' fast response enabled the quick sell-out.

Aligning marketing tactics with widely discussed headlines is an easy way for brands to catch people's attention. Then social media draws people into a conversation. Good brands, as Barabas and Neiman Marcus will and keeps the conversation going. Most importantly, the open dialogue is a way for brands keep selling.

More in this category: « Be there, or not. Your loss New Client: Website Design for Amazing Moves »
back to top