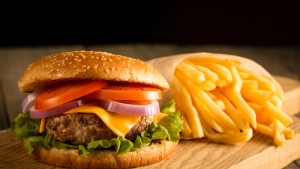 Carl’s Jr., notoriously known for overtly sexual advertisements, has adopted a new approach to advertising strategies. In its new ads, the younger, more provocative Carl Hardee Jr. has been replaced by a charming and more senior Carl Hardee Sr., who is not one for provocative, bikini-clad women.

The new strategy is vastly different from previous ads, where millennial playboy Hardee Jr. has previously been known for flaunting his flashy lifestyle and using naked women and sex appeal to appeal to consumers, a tactic Carl’s Jr. has relied on to sell burgers for over 15 years.

The new ad featuring Carl Hardee Sr., played by actor-musician Charles Esten from Nashville, addresses the shortcomings of the previous advertising strategies from the get-go. Booting his sex-obsessed millennial son from the company, Hardee Sr. aims to take back the business and bring back to the focus to fresh, juicy hamburger patties and away from scantily-clad women in bikinis. “It was time to evolve,” says Jason Norcross, executive creative director, and partner at the advertising agency 72andSunny . “Some of the product attributes got lost because people were too busy ogling girls.” Along with its new, less controversial ads, the company has also introduced a new tagline: “Pioneers of the great American burger.”

Although Carl’s Jr. is changing its narrative, execs know that there’s no use in ignoring the contentious tactics of the past. New ads feature previous stars like Genevieve Morton, Emily Sears, Elena Belle, and Charlotte McKinney, however strictly as works of art and cardboard cutouts. The target audience has remained consistent – younger, burger-hungry men – but Norcross states that the company is looking to be a competitor among more cheaply-priced rivals, such as The Habit and Shake Shack. The new campaign will focus strictly on “food, not boobs,” a much-desired change from its past campaigns.

More in this category: « Advertising Agencies Battle It Out In Super Bowl 51 April Fools' Day Ad Hoaxes »
back to top