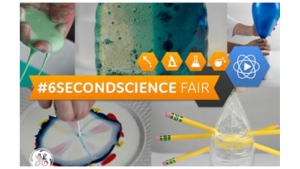 Thanks to General Electric, science enthusiasts worldwide were able to participate in a virtual science fair earlier this August. For months now the company has been promoting quick six second snippets of science-related videos using the hashtag #6SecondScience.

This brilliant idea to create an entire campaign stemmed from the popularity of their video involving milk, food coloring and dish soap, which created an incredible amount of buzz on the social platform back in February. With this inspiration they decided to launch a full-blown six second science fair campaign cleverly timed around the start of school. The online science fair ran from August 8-15th and used the tagline, "How much science can you fit into six seconds?" Over 400 videos were entered displaying all facets of the science field, and all made sure to include the hashtag #6SecondScience. What's best about the Vine app is videos can be shared across multiple platforms. GE shared some of the best entries on its Facebook, Twitter and Tumblr pages.

Another thing to note regarding the success of this campaign is that GE picked no winner, and there were no prizes involved whatsoever. They purely just put out an interesting and engaging campaign that resulted in tons of entrants and thousands of "re-vines." What's even better is this unique, fun, and engaging campaign created great content that other media outlets wanted to share as well - which made some bloggers deem GE one of the best brands to leverage the Vine platform. For instance, Mashable wrote a post about some of the best entries, and the story got over 46,000 shares.

Other news outlets such as Yahoo!, Business Insider, and AdAge posted about the week-long event and received the same type of reader reaction. Without the Vine app update back in July where users could start sharing other people's posts, this type of success for brands could never have happened. Additionally, this campaign did more than provide week-long entertainment for science lovers, it showed marketers that Vine is more than just a marketing platform for e-commerce and retail brands. Hopefully GE's success can inspire some other creative campaigns by health and science groups!