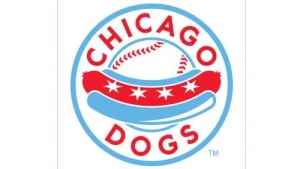 The Chicago Dogs will play next year in the new $60-million, 6,300-seat ballpark being built in Rosemont, at the corner of Balmoral Avenue and Pearl Street.

“We wanted a name that captures the spirit and culture of Chicago,” Chicago Dogs co-owner Shawn Hunter said. “It had to be fun and authentic.”

The team’s red-white-and-blue logo, designed by Denver-based Adrenalin Inc. (the sports marketing division of Real FiG Advertising + Marketing), incorporates a hot dog, baseball, and the colors and stars from the Chicago flag.

So why not just call the team the Hot Dogs?

“The Chicago Dogs was our first and only real consideration for this team’s name,” Hunter said. “It captured our hearts immediately the day we decided to commit to the vision.”

The Dogs will play in the American Association of Independent Professional Baseball, but will not be the first “dog” in the league.

This article was originally published in the Chicago Tribue by Tim Bannon.

More in this category: « UNLV Introduces Spirit Mark Refresh for Athletics Dinger, The Much-Maligned Mascot, Just Wants Colorado’s Love, And A Rockies Win »
back to top