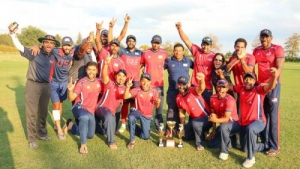 In one of the first tangible representations of progress in the reformation of American cricket governance in the wake of USACA's expulsion at the ICC annual conference in June, ICC Americas has announced that the new governing body being formed to replace USACA will be known as USA Cricket. A new logo representing the new governing body was unveiled on Sunday on the 173rd anniversary of the first international sporting contest between the USA and Canada held in New York City on September 24, 1844.

"One of the things we really tried to do is build a brand that not only connected with our past and 300 years of cricket in the United States, but also helped paint a picture for what the future of this sport could be," Eric Parthen, USA project manager for the ICC, told ESPNcricinfo in an interview during the event. "We started the process working with Adrenalin (the sports marketing division of Real FiG Advertising + Marketing), a company out of Denver that has done some work with the NHL, Phoenix Coyotes, Los Angeles Kings.

"The logo process engaged a wider population of people through surveys. Once we got through the survey process, we drove it more internally with Adrenalin, taking the feedback we got both from the [ICC's USA] advisory groups and from the surveys in the wider population within the cricket community and ultimately used that as the guiding principles for creating this logo."

Unlike the USACA logo, which featured an eagle embedded in a cricket ball, the new USA Cricket logo looks similar to the shield logo of the National Football League (NFL). The logo prominently features a cricket bat, something that was non-existent in the USACA logo and a trait that Parthen feels would help signify a new identity to bridge the gap between mainstream American sports fans and the core cricket membership base of expatriates from South Asia and the Caribbean.

"As we want to take this sport mainstream and not just be a sport for the people that are currently playing it or the ex-pats, that bat was the single most identifying factor for cricket within the United States," Parthen said. "Maybe that's not true for Australia or England or India, but in the United States, the one thing that mainstream America associates cricket with, is the bat.

"So we felt it was an important part and we wanted it to be detailed enough that it didn't look like a rowing paddle, an oar, or a fraternity paddle. We looked at a number of different iterations and we felt this was the bat that had the detail that really looked like the cricket bat. So it's a prominent feature of the logo but something we feel is pretty important to try to connect the sport to mainstream America."

A Successful Logo Redesign In Denver

According to Parthen, a cricket ball appears in the majority of logos throughout the cricket world. He also noted that the logos of most American sports leagues and teams also include a ball in their logo.

"In line with winning the Auty Cup for the first time in 26 years, we felt like this logo needed to be something that's fresh and unifying in rebuilding and something that everybody could connect with.

"Not just connect with the past or the future but embrace the past and look to the future and the goals we have for developing and promoting cricket, the goals we have for creating more competitive teams for competing on the highest stage. We just wanted something that resonated with the American public. If we were going to be relevant to the American people as a sport, we needed an element that clearly defined our game."

The logo's red, white and blue color scheme is a nod to the American flag while Parthen says the other main design characteristic is a single star placed inside the 'U' in 'USA' which he cites as a symbolic touch for what USA Cricket should represent both on and off the field.

We’re excited about our new brand incorporating elements of our past, present, and future! #WeAreUSACricket pic.twitter.com/FGH1yBDxqF

"The single star in the U speaks to a couple of different things," Parthen said. "One, through this whole process we've tried to be a unifying body. We want this to be a unifying organization so we felt the star speaks to one organization providing that strong leadership and also equally as important this one star represents cricket being one team that's necessary to be successful.

"It's not a great individual, great bowling, batters are more important than bowlers or vice versa. It takes a full team to win and we felt that star ultimately spoke to the fact that if we're going to succeed, we need to do it both on the field and off the field working together."

More in this category: « Dinger, The Much-Maligned Mascot, Just Wants Colorado’s Love, And A Rockies Win A LAX San Diego team name: Seals »
back to top