Advertisement of the Month: Gatorade’s Never Lose the Love 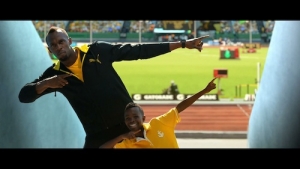 With the 2016 Summer Rio Olympics at a close, we decided it was only right to feature one of the many great Olympic advertisements this month. “Never Lose the Love,” is a 70-second spot from Gatorade featuring some of our favorite Olympic athletes. These elite athletes have a particular dedication to their sport that goes beyond grit and commitment; they have a true love for their sport.

Serena Williams’ alarm goes off, and she turns over to find a young Serena look-alike that says, “It’s time to play.” April Ross, Usain Bolt, Paul George, and Serena Williams are headed to start their training for the day all with younger versions of themselves encouraging them to get going. Jimmy Durante’s, “Young at Heart,” begins to play pleasantly in the background. “Stronger!” “Faster!” “Higher!” Each of the athletes’ mini-me’s spur on their Olympic counterpart. From running suicides, to swatting tennis returns, to performing dribbling drills, the Olympians are pushing themselves with their mini-me’s behind them. Usain Bolt sprints while pulling his mini-me behind him in a sled. A young girl dives for a volleyball in the sand with April Ross. A small Serena Williams does her signature celebration with larger Serena. And a little Paul George dances in the background. Each Olympian is on their respective playing field with their mini versions as the ad ends with text on screen, “The Best Never Lose that Love.”

The Olympic Gatorade advertisement is a part of a series called “For the Love of Sports.” This ad was the start of a series which featured athletes whose careers were shaped when they were kids. The campaign offers an opportunity for people to vote for their choice of the four children's’ sports charities that Gatorade will support. These charities include Special Spectators, Right to Play, National Sports Center for the Disabled, and Midnight Golf.

Ad campaigns that resonate with viewers require precise relevancy that pulls together a product with an audience, the right message and the right timing. Gatorade has a broad range of products but is best known for its sports drinks. This ad pulls all the essentials of relevancy together to deliver a great Olympic ad. No matter what the industry, product, or service, advertising is only effective when executed from a strong strategy tied directly relevancy.

Inside each of these athletes is their inner child that keeps them going with the sheer love of their sport. Does your brand need assistance with creating relevant advertising? Contact FiG today..

More in this category: « Industry News: Stay Relevant with Twitter's Algorithm Ad of the Month: Geico's "Lemonade, Not Ice T" »
back to top