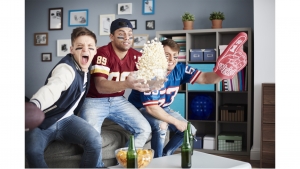 What a painful Super Bowl game that was... Thankfully we were provided a bit of entertainment during the commercial breaks with everything from the good, the bad, and the “they really spent money on that?”

With costs this year as high as $4.5 million for 30 seconds and spots selling out months in advance, our hopes were high, and there were a few brands we felt saved the day.

Probably didn't think this one was going to cause such an online/social media meltdown, did you Coca-Cola? Well, me either. Watching the game at a local establishment, this ad came on and the crowd, literally, went wild (and soon followed with a U.S.A. chant). This was one of my favorites, capturing the diversity of America beautifully, because we are supposed to be a melting pot aren't we? Whether intending to or not, they also perfectly play into the American spirit that come along with the Olympics beginning in just a few short days.

We're suckers for Budweiser ads and this year was no different. A puppy, a horse and a well chosen song makes for yet another classic. Keep them coming Budweiser...

Subtle, but I think Hyundai nailed it. A little humor, incredibly relatable, and only 30 seconds, it was sweet and to the point. Nicely done.

We couldn't help but like this one. Great play on former Bronco, Tim Tebow's lack of contract – why would he want a contract when he can do so many things without one? Very entertaining.

Sticking with their “a man and his truck” theme, this one was certainly good for a chuckle during an otherwise not very funny game. (We also liked their second spot supporting World Cancer Day).

Which were your favorites, or least favorites? Share in the comments below, we'd love to hear from you!

More in this category: « Top Ads of 2013 Ad of the Month: UNICEF Tap Project »
back to top