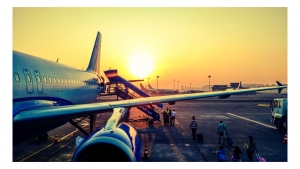 Heineken is testing people’s spontaneity and, well, sincere craziness. Partnering with Wieden + Kennedy in New York, they set up an airport stunt at JFK’s Terminal 8, daring travelers to push a button and commit to an unknown location, a game they are calling “Departure Roulette.”

The stunt truly represents the brand’s adventurous spirit and tests people to travel outside their comfort zone. The inspiration comes from the new Heineken ad campaign “Dropped” that launched about a month ago, which features 4 different men literally getting blindfolded and dropped in remote destinations while their adventures are filmed.

The “Departure Roulette” board was set up twice and there were a few just crazy enough to push the button.   Heineken even foot some of the bill, paying for the flight and hotel, along with providing some money for expenses. While these people may seem nuts, they did get sent to some pretty awesome locations! Who knows, they could have the trip of a lifetime!

Check out some of the reactions, as these brave soles drop their plans for more exotic locations.

Does your brand's advertising need a new spin? Contact FiG to find out how we can help you create a successful campaign.