Ad of the Month: Robot Fans 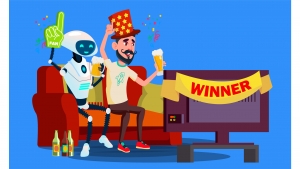 A Korean baseball team has a new way to fill seats at games: robots. The Hanwha Eagles recently unveiled robot proxies called "fanbots," which enable fans to watch and cheer at games from home.

The machines or robot fans are programmed to do the wave, cheer, and chant. The bots also hold up screens with messages such as "Go Eagles!" or "I Love You, Eagles." Fans can also send custom messages to be displayed on the screens during the game. They can even upload selfies, so their photos appear as the fanbot's face. The robots even encourage real-life fans in the stadium to cheer "at important moments" in the game, according to the YouTube video.

An inspiring concept indeed. Now, if only we could get robot fans installed at Coors field — the Rockies need all the encouragement they can get.

More in this category: « Social Media Generation Gap? Ad of the month: IKEA BookBook™ »
back to top